Arabic Language: From History to a Modern Localized Content

Arabic is a widely spoken language in the world. Roughly 290 million people in 28 countries from the Middle East to Africa speak Arabic. Muslims hold Arabic in high regard because it is the language of the Holy Quran. Muslims also believe that Arabic has been preserved in the purest form in the Holy Quran. But where did it come from?

The Semitic language originated in the Arabian Peninsula and it spread to outer areas over several millenniums through migration to the Middle East.

The Arab Conquests of the 7th century CE spread the language further across while the speakers of different forms of Arabic dialects brought their language across the Iberian Peninsula, China, the Middle East and North Africa. Arabic became a prominent language after intermarriages with indigenous people took place in areas where the Arabic speakers settled.

Arabic has a beautiful script. Arabs living in the Arabian Peninsula took up the writing system from the Nabataeans (Arabs living in Petra – today’s Jordan) during the time of Christ. Nabataeans adopted their writing system from the Arameans who got it from the Phoenicians. The long process of evolution has changed the shapes of letters in Arabic so much that it no longer resembles its origin.

Arabic is one of the greatest languages of the world that has a rich vocabulary, style and very elegant script. A major part of its development is attributed to poetry during the pre-Islamic period. With the Quran’s revelation and its challenging message with an expansive and unique style of poetry had a lasting effect in the Arabian society. Arabic linguists and grammarians used the language of the Quran as their standard and the language continued to develop its literature made up of different genres, styles and forms of expression. The language also spread to further parts and now is spoken by millions of people.

When Arabic is written, it is always written in Modern Standard Arabic (MSA). MSA is a classic form of the language which is taught in schools and is used in formal communications.

Arabic dialects can be differentiated based on regions where people live and these dialects are used for everyday communications. Colloquial Arabic is more often spoken at home or between friends and in shops in the market. People also use it when writing informal letters or when participating in informal written communications such as emails, text messages.

This brings us to two approaches to learning Arabic. The first approach is to learn MSA first which gives anybody who is learning Arabic the mastery over Arabic’s grammar and alphabet. Then he can move on to learn one of the dialects. This approach is followed by universities around the world that teach the Arabic language because it gives the students a good understanding of Arabic grammar first and wide working vocabulary.

The second approach is to learn a dialect first and then learn MSA. Arab children tend to go through this approach because they learn to speak the way their parents do right from birth. Before they can talk, they hear the language used in everyday situations at home so they learn the dialect first. But once they begin to go to school, they begin to learn the formal rules of MSA and its written form.

The five major dialect groups in Arabic are:

There is no easy answer to the question “how many Arabic versions are there?

The Arabic language consists of a continuum of dialects spread across the Arab world. Then there are regional differences to consider as well.

Simply put many countries have an ‘official’ dialect that is widely spoken and used as an official one. For example “Cairene Arabic” is a dialect popular in Egypt and informally known as Egyptian Arabic.  Similarly, “Najdi” dialect is spoken in Riyadh, Saudi Arabia. There are more than 14 different dialects of Arabic spoken by 85% of the 290 million Arabic speakers. The rest of the 15% are speakers of Libyan Arabic, Sa’idi Arabic, Omani, Emirati and Najdi Arabic along with Kuwaiti Arabic. Here is a pie chart from Arabic vs. Arabic: A Dialect Sampler that shows the dialects. 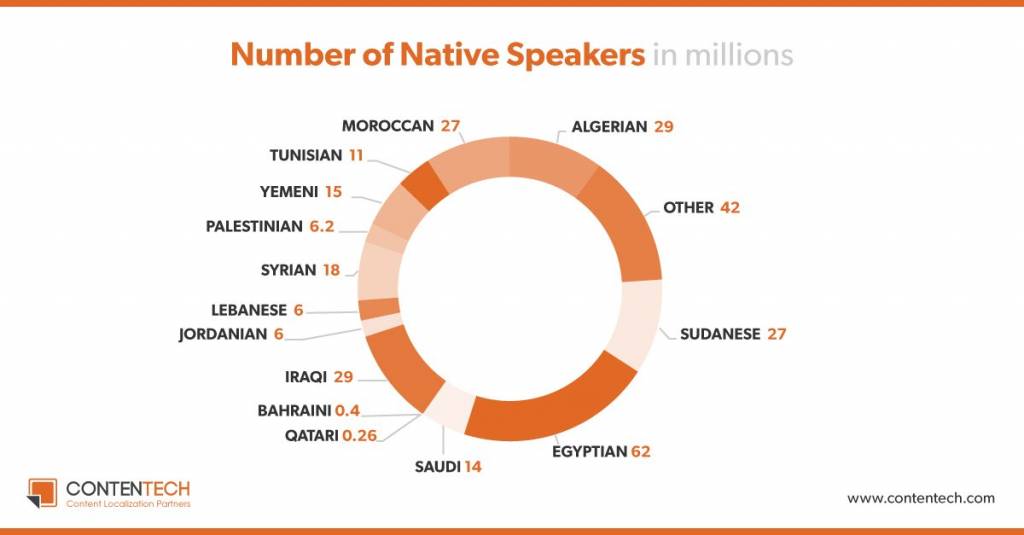 What You Need to Know When Learning the Arabic Alphabet

Like any other language, it takes a while to learn Arabic. You can start by learning the basics of the Arabic alphabet and consonants. Arabic is read from right to left and the letters are always joined together in writing except for a few letters because of their shape. The total number of letters in the Arabic alphabet is 28 and so are the consonants. Arabic scripts can vary, some are more intricate than others but the best-known ones are “Thuluth” and “Kufic”. As you must have seen, Arabic script is widely used for decorative purposes in mosques, building and houses because one can write the script beautifully. 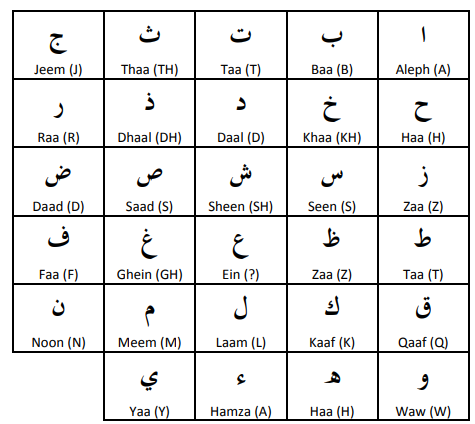 There are many books and excellent sources available online that give complete details on learning the Arabic language. For example a collection of Arabic audio and video lessons called “Talk in Arabic” is popular. Another online learning resource called “ArabicPod101” helps in learning Arabic. You can also practice speaking Arabic with an app called “iTalki”.

Arabic is the mother tongue of more than 250 million people spread across 25 counties. And over a billion people can actually read the script even if they can’t fully understand the language. It is also one of the official languages of the United Nations and it is a good idea to learn the language that is so common. Some people learn Arabic because they are shifting to the Middle East or need to conduct business with Arabs. Here are the top 5 reasons why people learn Arabic.

1- Arabic is in Demand

Arabic is spoken in more than 20 Middle Eastern countries which can help you travel, switch jobs and get more work opportunities in these countries.

Islam is the world’s second largest religion and the first largest in the Arab world. Islam is a lifestyle and learning Arabic helps people gain insight about Islamic beliefs, traditions and customs.

4- Arabic Has Easy Grammar Compared to Other Languages

In comparison to other languages like Russian, German, Greek – Arabic’s grammar is easier to learn. There is no neuter and everything is masculine or feminine. Arabic vocabulary is made up of root/stem consonants that can be easily memorized.

Falling just behind English, Arabic has more than 280 million number of native speakers. It is an important and very relevant language today which will continue to spread in the future.

Localization and translation companies have a huge role in making these online platforms accessible to multiple countries and people of different locations. Localization companies that offer Arabic translation services also offer localization of any content for a target audience belonging to another country. There are five steps that Arabic Translation Company can follow for Arabic language translation.

The Process of Translation:

Arabic Translation Company first analyses the text it is going to translate. The subject, content, length and writing styles are analyzed. The translators first skim read the parts of the text to get an idea of what they will be dealing with. They also check the concept and terms used in the text.

The translators will systematically translate the text appropriately. Longer sentences maybe cut in half so as to make sense and create a natural flow of translation. This way the first draft of translation is completed.

Once the first draft is complete, an accuracy check takes place. This calls for comparing the translated text with the source text to see if it makes sense and is in the same spirit. Some improvements are made.

In the last step, the proofreaders will go through the entire translation and make improvements for the quality of expression. In this step, polishing the text is the main goal.

Partnering with an Experienced Translation Company

If you’re looking for a translation company to work on your Arabic translation project, consider Contentech! It is a leading technical language solution with experience in Arabic document translation services that spans over 24 years. Arabic is one of the top languages that Contentech has dealt with and has a large number of linguists who are experts in it. It has served hundreds of clients around the globe for translation documents, mobile app, websites and software in the Arabic language. The most popular industries that regularly require Arabic translation services are IT (software and hardware), Automotive, Marketing, Medical, Legal, Games, Administrative. We are a trustworthy technical language solution service provider.

The most popular language pairs for translation that Contentech regular receives are:

Due to technological advancements, businesses and individuals expect quick turnarounds whether it is for their businesses or personal projects. Contentech understands that which is why we offer the highest quality of Arabic translation services with quick turnaround times and in your budget. Get in touch today for a custom quote for your project. 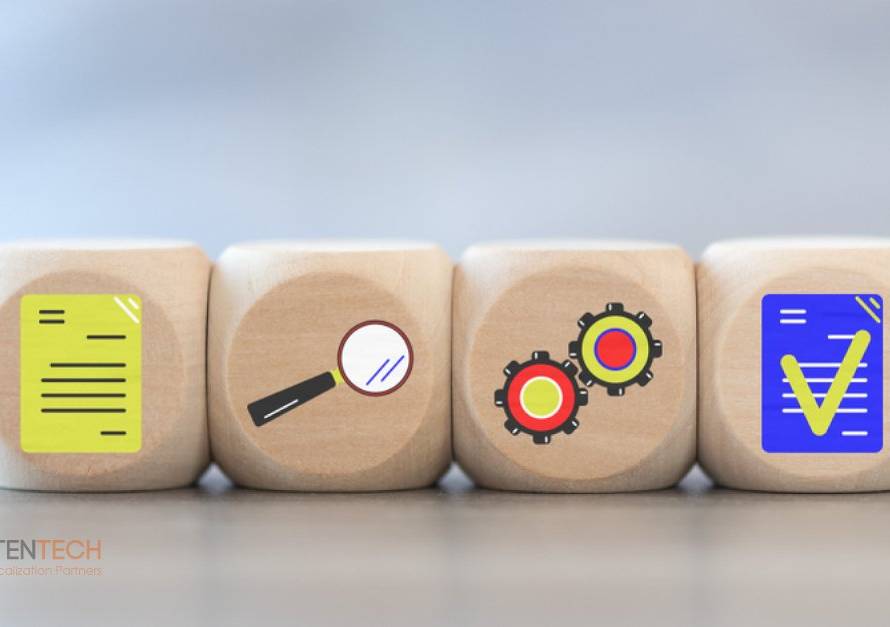 Linguistic Validation: Our Process From A to Z 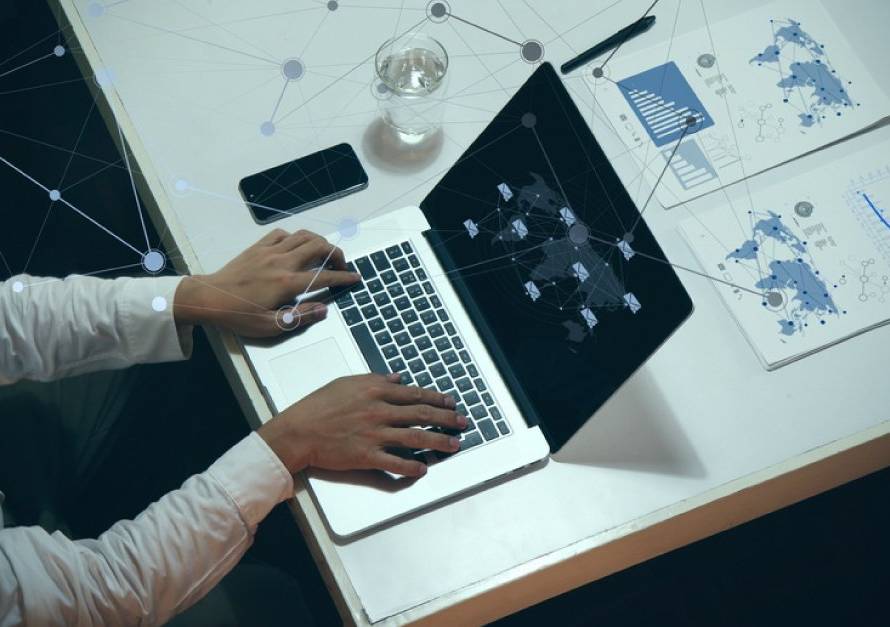